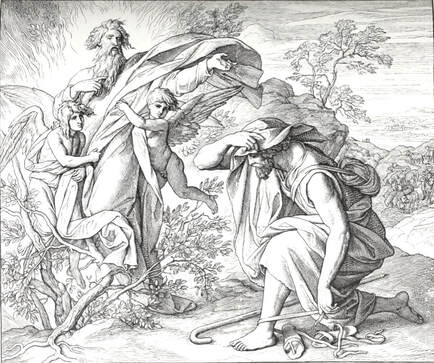 3. The Call of Moses: Stubborn Reluctance Overcome
The milestones of history are marked by people who have met impossible demands. Battlefield monuments utter mute testimony to these events. Modern Turkey owes its existence to Kemal Ataturk, who rallied his troops with the impossible demand that they drive back the enemy from Gallipoli. Your most impossible demand may seem small in comparison-but not at the time the challenge presented itself. Perhaps it was writing an academic paper without adequate time or expertise. Or maybe it was the time when your church group undertook an evangelism program. This study shows how God put an impossible demand on Moses and propelled him into national leadership. 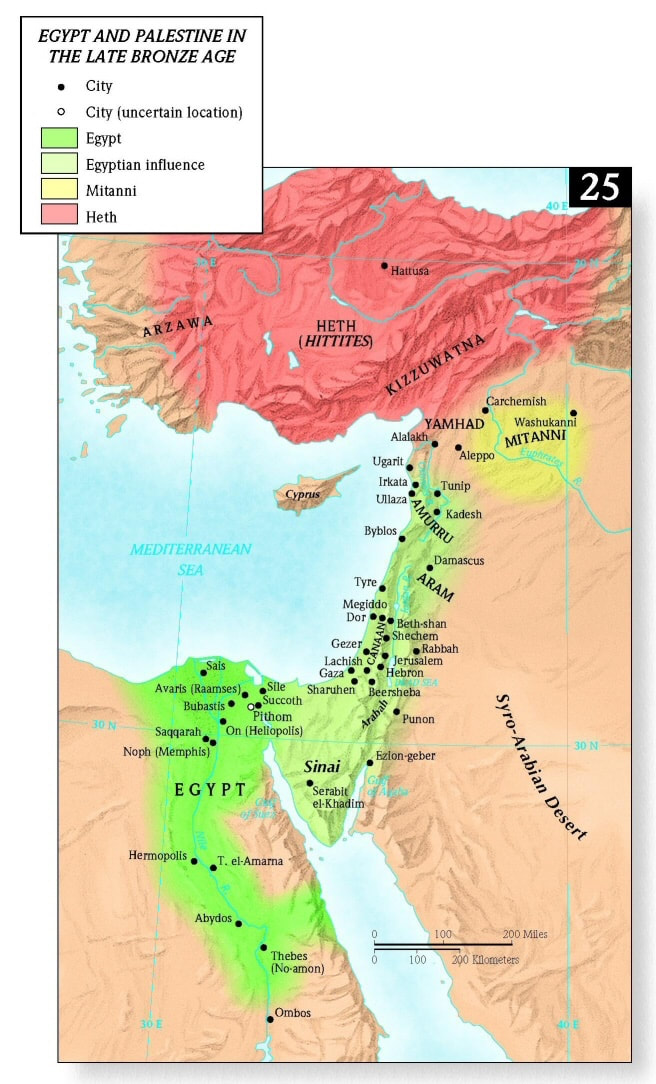 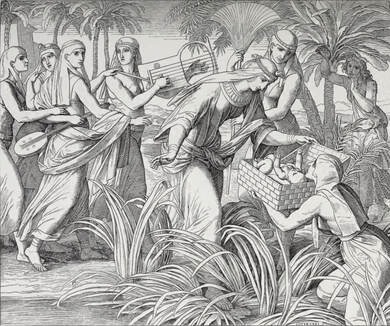 Lesson 2 - The Birth and Escape of Moses: A Mother's Faith, a Son's Brashness
Few of us can brag about how bravely we have responded in crisis. Faith, for us, is often a comfortable intellectual exercise, not something that demands bold action. That definition becomes even more attractive when we're not sure how to distinguish between faith and foolishness. This study contrasts a privileged kid's brashness with a woman's courageous faith in action.
Parallels between Exodus/Moses and Jesus
On the Aramaic language
Aramaic is a language independent of but related to Hebrew in the sense that both are Semitic languages of the Northwest language group. During the time of the Neo-Assyrian Empire, Aramaic began to grow as the common language of the area.  At it's height it was spoken over much of what we call the middle East.  When the Jews were displaced from Israel and Judah by the Assyrians, Babylonians, and Persians, learning Aramaic would have been important.  Several translations of the Old Testament into Aramaic were created including the Peshitta (Syraic) and Targum.  268 verses of the ("Hebrew") Old Testament were originally written in Aramaic, including significant portions of Ezra and Daniel.  Several verses in the New Testament also contain Aramaic words transliterated into Greek letters.  It is widely held that the Jews in Jesus time likely used Aramaic as their everyday language, but would have retained Hebrew in religious settings.  Many educated Jews in Jesus day would have known Aramaic, Hebrew, and Greek and possibly Latin.
See also: 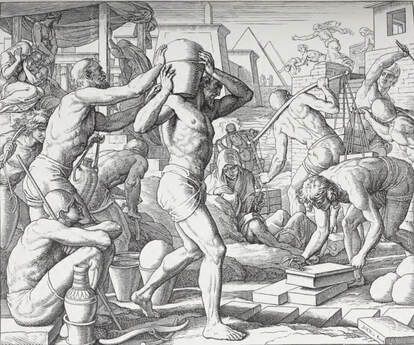 Lesson 1 - Israel's Oppression: Evil Plans, Bold Resistance
Oppression is a nasty word, but it grabs the headlines because it's the reason for much conflict today. Scenes out of this chapter fit totalitarian societies. Only the methods of oppression change. God's people were not spared in 1700 B.C., and they are not always spared now. But in this study you will find a bright spot of courageous resistance.
Introduction
Name
The name "Exodus" comes from the translation of the Old Testament into Greek, a translation known as the Septuagint which goes back to the year 285 B.C. Exodus means "departure" or "going out."

Authorship
The Prophet Moses, though modern "scholars" may disagree.  See what Jesus says in Luke 24:44.

Time period
There is great debate over the dating of the events described in Exodus.  Basically two camps have emerged "late date," and "early date."  The dating of the Exodus is based in part on evidence from non-Biblical sources, including the history of Egypt itself. First we look at the "early date" theory.  Consider 1 Kings 6:1 (though the Greek and Hebrew texts have a difference here.)   Based on archaeological evidence, particularly a list of Assyrian officials, historians place the 4th year of Solomon's reign about 966 B.C., which puts the date of the Exodus as 1446 B.C.  If this is correct, then the "new king who did not know about Joseph" would come from the dynasty that drove out the Hyskos.  This would be the time of the "new kingdom."  This would make Thutmose III the pharaoh during the oppression and the pharaoh of the Exodus would be Amenhotep II.
The so-called "late date" of Exodus is a more modern proposal based on various archaeological findings and on Exodus 1:11.  These dates vary but scholars in this camp would put the Exodus between 1350 and 1225 B.C.  Most assume that Rameses II was the pharaoh of the Exodus and Rameses I and/or Seti I as the pharaohs of the oppression.
Other issues with dating involve difficulties reconciling Exodus 12:40 (see also  Genesis 15:13, and Gal. 3:15-17), with the genealogy of Genesis 46:8-27.  However, this issue is related more to the timing of Jacob's arrival into Egypt.  The difficulty is that even if we can pin down the date of Jacob's arrival we can't with certainty pinpoint the date of the Exodus, and vice versa.
If you're interested, the following links provide additional information on the dating debate:
- https://www.cbcg.org/430-years-of-galatians-3-17.html
- https://rb.gy/06wrze
- https://biblicalhistoricalcontext.com/israelite-origins/israelite-origins-late-date-exodus/
- https://www.evidenceunseen.com/date-of-the-exodus/
Proposed Timelines: holypig.com/cotor/Bible/Timelines/PDFs/Visio-1630-1510%20small.pdf
holypig.com/cotor/Bible/Timelines/PDFs/Visio-1510-1390%20small.pdf

Geographic Information
There is also debate and confusion over the location of several places mentioned in Exodus, including the point of the Red Sea crossing, and Mt. Sinai.  Consider the differences in the following proposed maps. 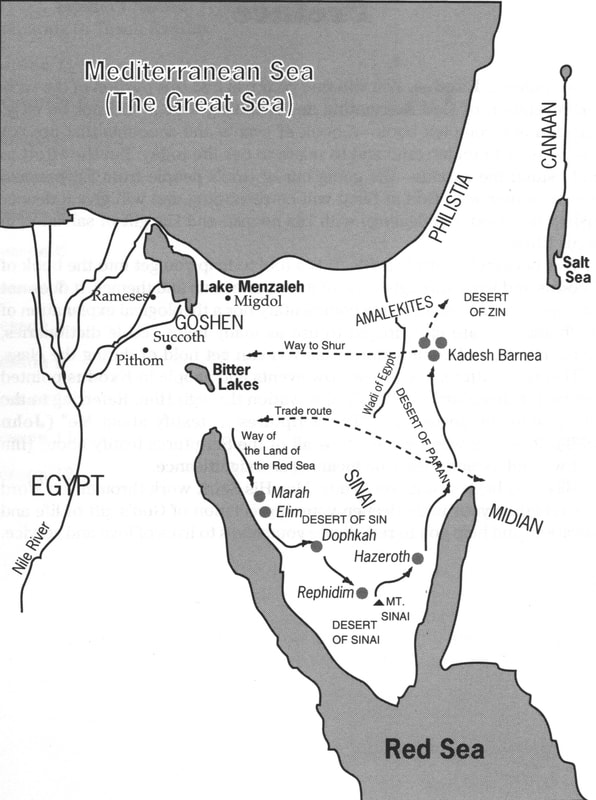 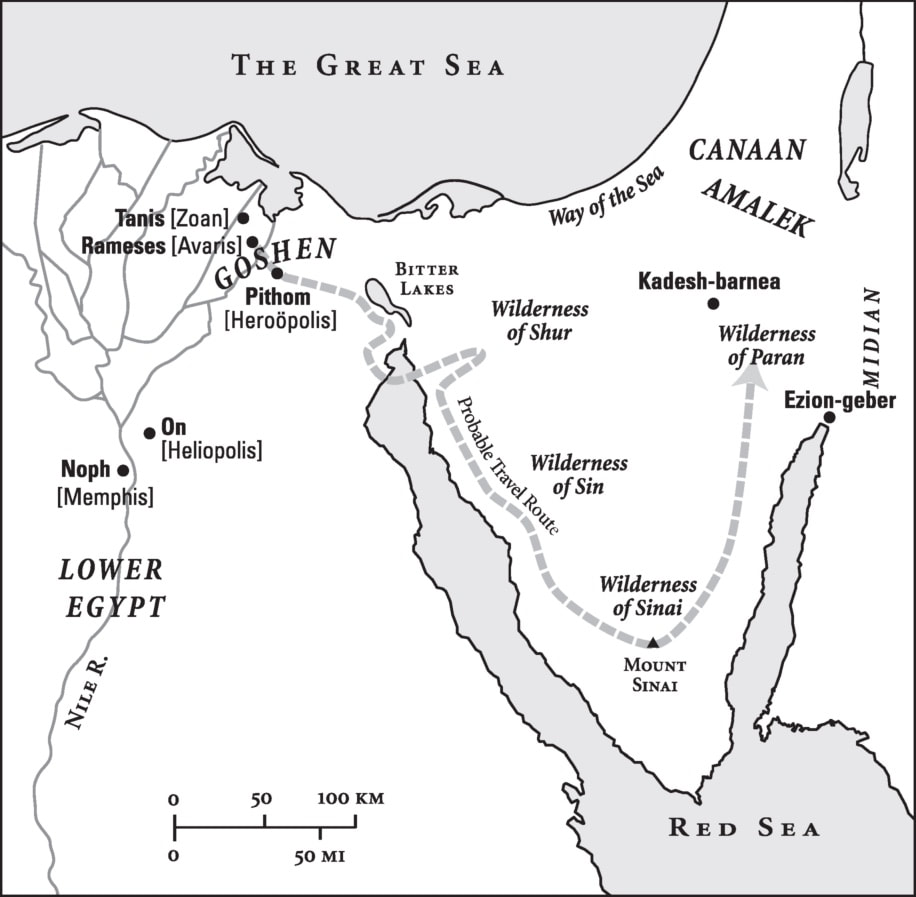 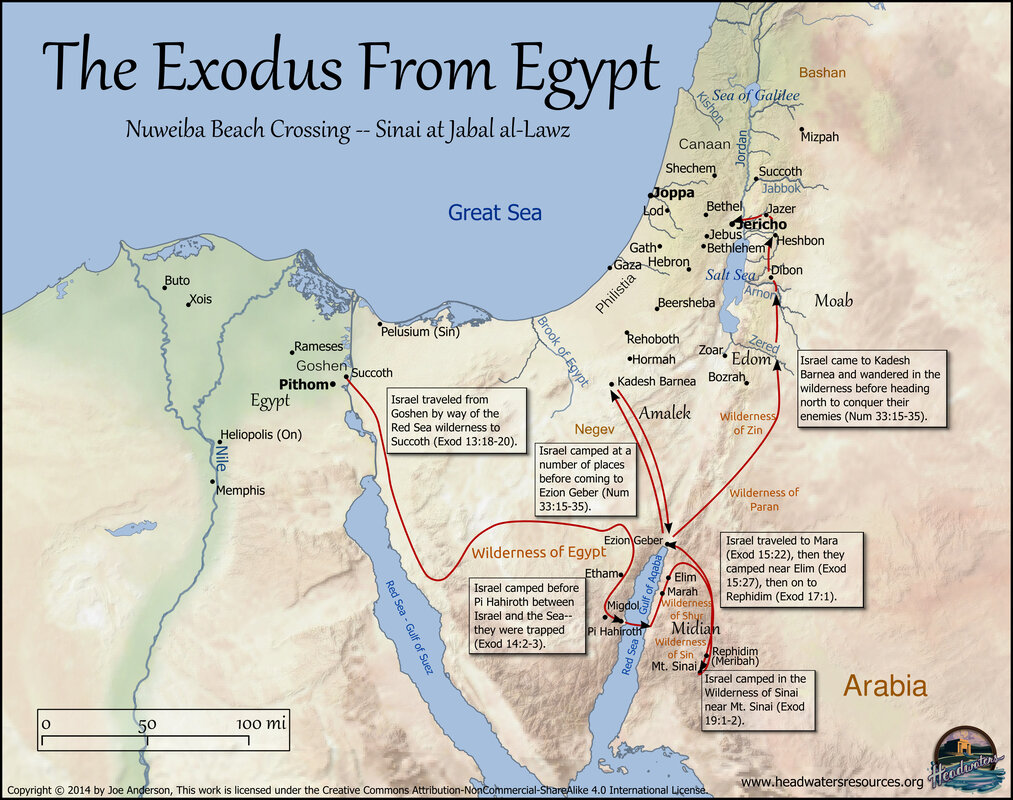 Preliminary discussion
Themes
While trying to understand the technical details of the Exodus, when did it happen, what was their route, etc., we can be tempted to focus on those details and miss the theological points of the book, and there are many.  As Christians we must also study this book in light of the coming of Christ.  Some things to consider throughout this study:
This material is adapted and borrows heavily from a study on Exodus at Lutheran Church of the Cross Laguna Woods and Aliso Viejo, CA as found here.  Additional sources: